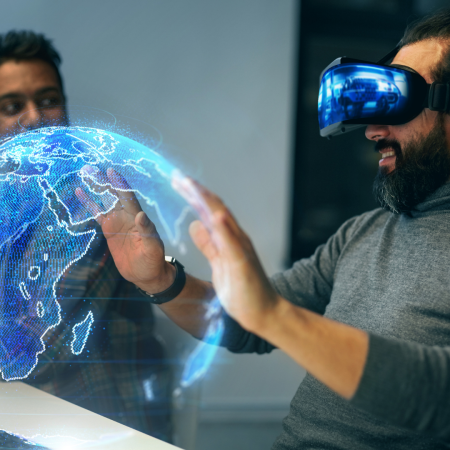 It is no secret that video calls are becoming more and more common. With the rise of social media, most people prefer to communicate with others through video chats rather than through text or phone conversations. However, there may soon be a new way to make these video calls even better! Today we will discuss how hologram tech may replace traditional video-call platforms like Skype in the future.

Hologram technology is a new creation that allows users to communicate via holograms instead of video or phone calls. Holograms are projected onto screens and objects using lasers, making the projection seem three-dimensional. The goal of this technology’s developers is to make communication easier, more convenient and give people the ability to express their personalities through these virtual characters.

This technology seems similar to augmented reality, but there are some essential differences between these two concepts:

AR: This is a live direct or indirect view of a physical, real-world environment whose elements are augmented by computer-generated sensory input such as sound and graphics. This mix of real and virtual objects can be viewed through a smartphone or ordinary glasses. Holograms: Unlike augmented reality, hologram technology does not require special hardware to view these projections. They are visible to all users in the room, which makes this technology more convenient than AR.

Hologram technology may seem like a step beyond the traditional video-call platforms we use today. Still, some developers think this technology will become more and more popular, and within a few years, people may not even need actual screens to make holographic calls. Instead of using Skype or other similar software, users would be able to project their holograms onto any available space without worrying about expensive equipment.

How Can This Change Our Everyday Lives?

Technology is developed with many goals in mind, for example: making communication easier or more comfortable. Hologram technology has all of these advantages, and therefore we believe that it will help shape the way we communicate in the future. For example, Facebook with Metaverse: The world’s largest social network explores possibilities in the virtual reality (VR) realm and with good reason. The technology has progressed rapidly over recent years, yet its most apparent uses lie within gaming and entertainment. Facebook CEO Mark Zuckerberg wants his website to be more than just a place for people to watch videos; he believes VR could also become an extension of Facebook’s existing features. Through VR, users can share pictures and status updates in simulated spaces that exist within the digital confines of their computer screens. Now imagine sharing these creations with your friends in an entirely different way—through VR headsets that transport you into your friend’s memories.

At the moment, this new tech seems rather futuristic, but we will likely see it used in our everyday lives soon enough. The question is, how exactly would hologram tech change the way we communicate with other people? And could this be our next social platform?

Currently, there are two main ways of communication via holograms – either using smart-TVs (Samsung has already presented their version called “Samsung Holo-Light”) or via computer software. According to developers, integrating hologram technology into computers will make it possible for users to communicate through these projections on their device

As you can see, hologram tech has every potential of becoming the next big thing when it comes to communication platforms. However, users should keep in mind that this type of communication requires both sides of the conversation to access these projections, which may not always be possible.

Instagram is one of the most popular social media platforms in the marketplace today. With over one billion active users per month, you need to

TouchZen Media is recognized as a Top Development Company by DesignRush

We are a premiere digital innovation agency based in Los Angeles. We have been building award winning mobile applications for emerging brands, startups, and enterprise clients since 2014. We work as an extension of our clients’ businesses, providing them with the agility of a startup with the proven know-how of a world-class design agency.